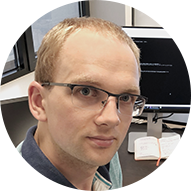 Marco is a software engineer and data scientist at Peercode. He has extensive experience with a large number of software techniques, tools and operating systems. Both as a software developer and data scientist. Marco has a Bachelors in Mathematics and Physics and also a Masters in Mathematics from the University of Utrecht. As a lead developer for a successful software platform, Marco has gained valuable experience in building, maintaining and further developing large complex applications in growing organizations. Since joining Peercode, Marco has made an important contribution to the analysis of large data sets for Sensoterra.com. As Data Scientist Marco has been instrumental in recalibration of the algorithm for measuring soil moisture for Sensoterra.com. As a software developer, Marco works among other things on the Dialogo questionnaire engine from Peercode as well as on a medical software system to question the pain experienced by the patient via voice messages and the patient's mobile phone.